← Would you like a print from the 1000+ Avatars project?
And one man in his time plays many parts by Kristine Schomaker → 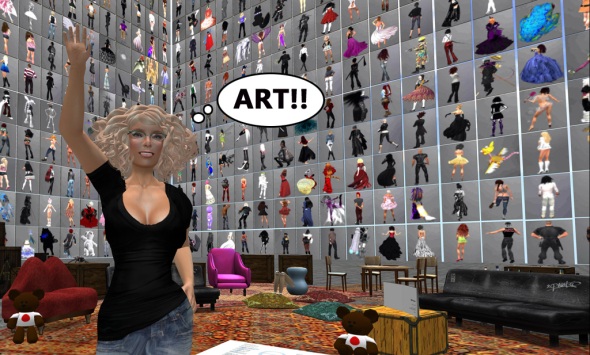 I want to thank you all so much for your love and support in following and being part of the 1000+ Avatar Project. I am so very proud of the work I have created here and I am glad I have been able to share it with the Second Life community. I think the work speaks for itself in showing the wonderful diversity that we all share here. The lives we create and live and the imagination that you all have shared shows that Second Life is much more than… well the media makes it out to be. I am proud to be a member of the Second Life community and I will continue to pass on its wonders, its capabilities and I will continue to forge ahead as one of the pioneers of this new media art form.

The project has gone through so much since it started in October 2010. I have published 2 books, the installation itself has moved several times and most recently I created a mixed reality installation/performance using a selection from the project in an exhibit in Los Angeles and Second Life.

The whole experience of shooting the portraits, working with my great friend Nikki on publishing the books, putting together the RL/SL art installation and standing back to see what I have done is something I will never forget. I have met so many amazing people along the way. more then 2000 of them :))

Some people have asked me, why I don’t go for 3000 or 10,000 avatars now. At first I kind of laughed it off and said… we’ll see. But as with my paintings, I know when I am finished. It is just a feeling you get. You look at the work you have created and you just know. It is done.

The 1000+ Avatars project has had an amazing journey the last couple years.
On June 3rd  from 12-3pm slt we will have one  last grand party in which you are all invited… then I will be taking down the installations at Coyote and Seraph City and they will go in my inventory. It is time.

Thank you again so much for your love and support!!
Gracie Kendal/Kristine Schomaker
http://www.1000avatars.wordpress.com

You can still purchase autographed copies of the books and prints too. Contact Gracie for  details.

From the original notecard on the project:

“Think for a minute about what makes you fabulous and how you can celebrate it.”
– Laura Mercier

Come celebrate your ‘fabulousness!’
I would love for you to be part of my project on online identity/anonymity.

If you want to keep up on where this project is going, where I’ll be showing it in SL and what I’ll be doing with it in RL. Please click on the Kiosk at my studio and join my mailing list :))

Process/What to do:
Wear or be whatever represents you in SL. Favorite outfit, or avatar etc.
You can use any AO, or pose or dance you’d like and any props you can wear. (Poses are easier and faster if you have a good pose you want to use.)
Please turn off all face lights.

When I am shooting the high rez pictures sometimes my system pauses for a few secs because of my graphics being up higher so it may take a longer to get the right pose and I may not respond right away.
Also depending on the AO or dance, it may take a little longer as I am watching for good angles and good poses.
Otherwise it normally takes 10-15ish minutes.

“What started out as a set of 100 portraits to help illustrate the idea of online anonymity, has turned into a sort of documentation of avatars in SL. There are so many questions I have been asking myself and ideas I’ve been pondering throughout this whole process, especially on the idea of online identity.”

“Like many of my other projects, I started out with one idea: to take portraits of avatars facing away from me. That was it, pure and simple. I had the idea that I wanted them to be unrecognizable, their faces hidden, just another level of anonymity in SL vs. RL. I plan on printing some if not all of these portraits out in RL for an eventual show in a gallery as well as publishing a book.”

“Our online identity has become a way of life for millions of people around the world. Not just in Second Life, but on many internet sites you go to. When you look on Facebook, or Twitter, how many post pictures of their children or pets? Pictures of places they have visited, cartoon characters they love, logos of their business, landscapes, art, and anything else they find from their lives that they want to represent their identity online.”

This is our avatar. I write about the avatar in my thesis…

I think it’s important to begin with an explanation of what avatars and Second Life are. Sean Egen explains that “‘Avatar’ derives from the Sanskrit word Avatara, which literally translates as ‘descent,’ specifically, a deliberate descent by a god into the land of mortals. In Hinduism, an avatar is the bodily manifestation of immortal beings… Many who use avatars today are literally approaching it from the point of view that their avatar represents their ‘incarnation’ into the internet.” In contemporary culture, an avatar is our virtual representation.

Most people are familiar with avatars through video games. In World of Warcraft, for example, players create avatars then customize their appearance. People also use avatars as icons in instant messaging applications, social networking websites like Facebook and Twitter and through their email programs. Avatars are also represented in film and other forms of media. Max Headroom (1986) is an early manifestation of an avatar. The British virtual band Gorillaz (2006) is made up of cartoon figures representing its real life band members. Movies such as Tron (1982), The Lawnmower Man (1992), The Matrix (1999) and Avatar (2009) give examples within the plots of alternate realities in which the person has an alter ego or other persona: an avatar.

Besides the practical reasons for having an avatar, there are many psychological reasons. Because avatars offer anonymity, people use them as a way to escape reality. In his book I, Avatar, Mark Stephen Meadows discusses how people use avatars as masks. “We are more inclined to reveal ourselves when we use our avatars. We’re more inclined to reveal what we want, dislike, and think. But in a world where information is more important than physical proximity, we are not as safe as we might assume… After all, the word persona originally meant, in ancient Greek, ‘mask.’ Not as in a thing that hides your face, but one that shows what is truly underneath.”

SL offers people the freedom to explore changing identity dynamics. Experimentation is welcome. It is a safe environment which allows unlimited freedom to express oneself and consider boundaries/barriers that aren’t readily accepted in the physical world. “Computer screens are becoming the new location for our fantasies… The immateriality of cyberspace dissolves not only space and time, but our identities as well. For some this is a frightening prospect, for others perhaps the beginnings of a new empowerment.”

“The portraits I am taking have become a documentation of the lives of hundreds of people who to me are fearless. These people (yes I say people, because no matter how we represent ourselves online, we are all people on the other side of the computer) put themselves out there into the brave new world of virtual environments as explorers, searching for anything and everything. They are amazing, creative, soulful people who I am so honored to have in my project.

Thank you to everyone for your amazing support!!!

6 Comments on “1000+ Avatars installation will be closing June 3rd”

And one man in his time plays many parts